There are a lot of myths surrounding timber decay. The simple truth is; dry wood is immune from all forms of decay, including wood boring insect (wood worm) activity.

Wood boring insects need a certain amount of moisture in timber of around 20% and higher to thrive. Even Death Watch Beetle (DWB) does not thrive if wood moisture contents remain below 15% all year round; dry timber in the average building has a moisture content of about 11%.

Insects and rot will only affect the sapwood of a timber member. Sapwood is the relatively new outer layers of a tree between the heartwood (inner part of the tree) and the bark, it contains the resins and proteins that the insects and rot need to feed on. The heartwood contains extractives, which are deposited in the timber as the tree grows, these extractives are toxic to insects and all forms of rot. Extractives can be ‘washed out’ of the timber by rainwater through a defect in the buildings external envelope. The chemistry of heart wood timber can be altered by fungus (caused by wetting) enough to make it palatable enough for insects. Basically, the extractives are the trees natural preservative.

Wood boring insects have natural predators – spiders. The long legged house spider in particular (Pholcus phalagioides) is an effective predator.The wide spread use of chemical preservatives have a negative impact on the eco-system in a buildings roof or subfloor space as the spiders are more susceptible to the preservatives than the wood boring insects.

All wood boring insects including Death Watch Beetle populations will decline if dry conditions are maintained inside a building, at the same time the predation of spiders will become more effective, eventually leading to the extinction of the infestation. And all forms of rot will perish in dry conditions – no chemicals needed. 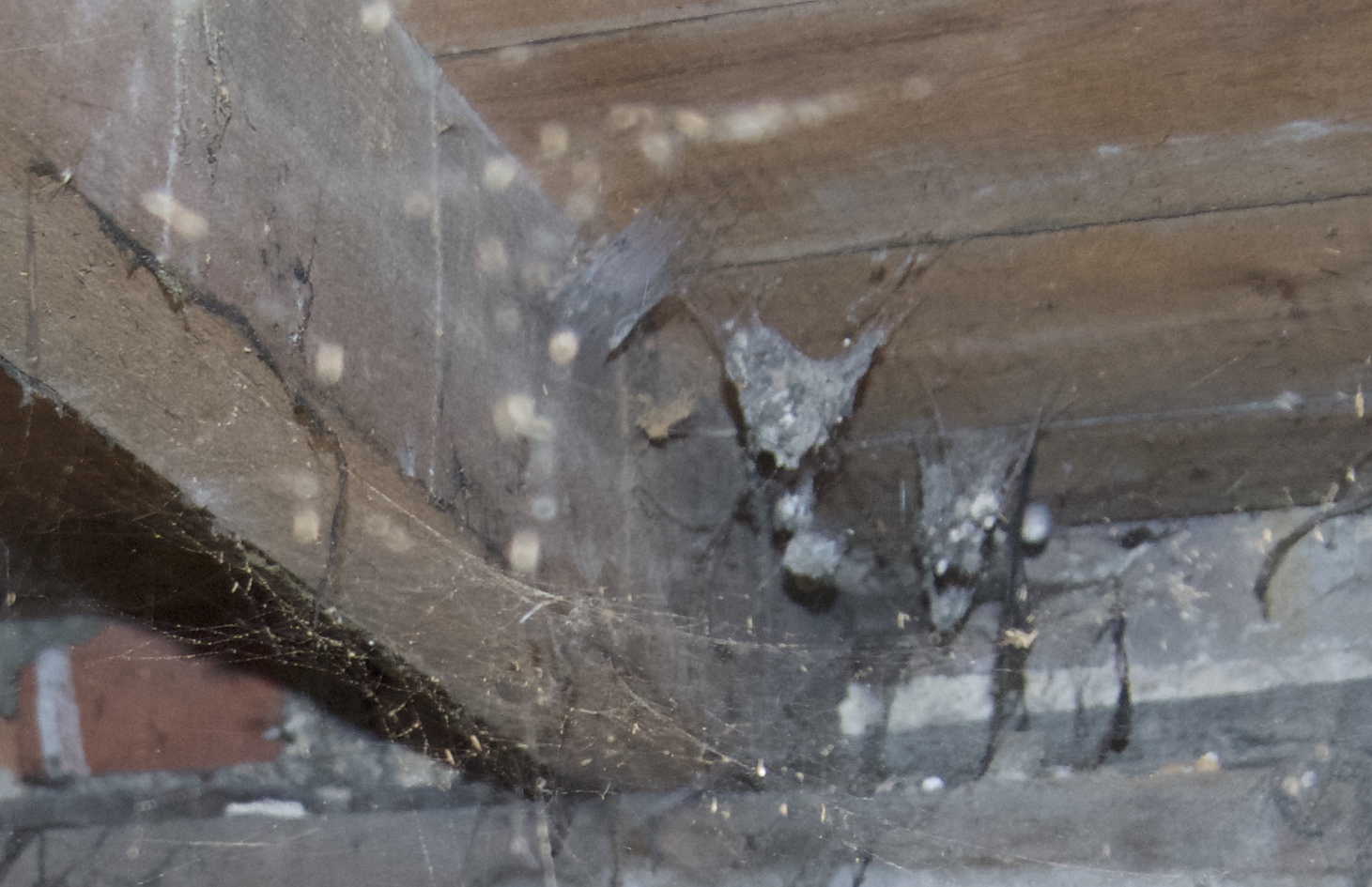 Example of spiders doing their job in a subfloor. Note; beetles inside cocoons.

The recommendation on this job was to lower external ground levels, remove cement pointing at low level and increase subfloor ventilation.

Here is an extract of what English Heritage has to say about Dry Rot: Mythology & Reality in the Timber volume of their Practical Building Conservation series;

‘Dry rot is often seen as a cancer-like fungus that cannot be halted, except by drastic treatment, because some exaggerated characteristics have been attributed to it. These popular myths include the ability to produce enough water from the decaying wood to sustain its self (so the fungus continues to spread and cause damage even if the original source of moisture that has caused the attack is removed), that it has the ability to transmit moisture through its chords, making dry timber wet enough to attack, or that buildings dry through a ‘moisture zone’ in which there is a risk of dry rot developing.

Despite these ideas being nonsensical, they are still widely believed, with the consequence frequently being massive destruction. In many cases the dry-rot treatment has caused far more damage to the historic building than the fungus’.

Basically, find the moisture source, turn off the tap and the rot will start to dry and die – no chemicals needed. 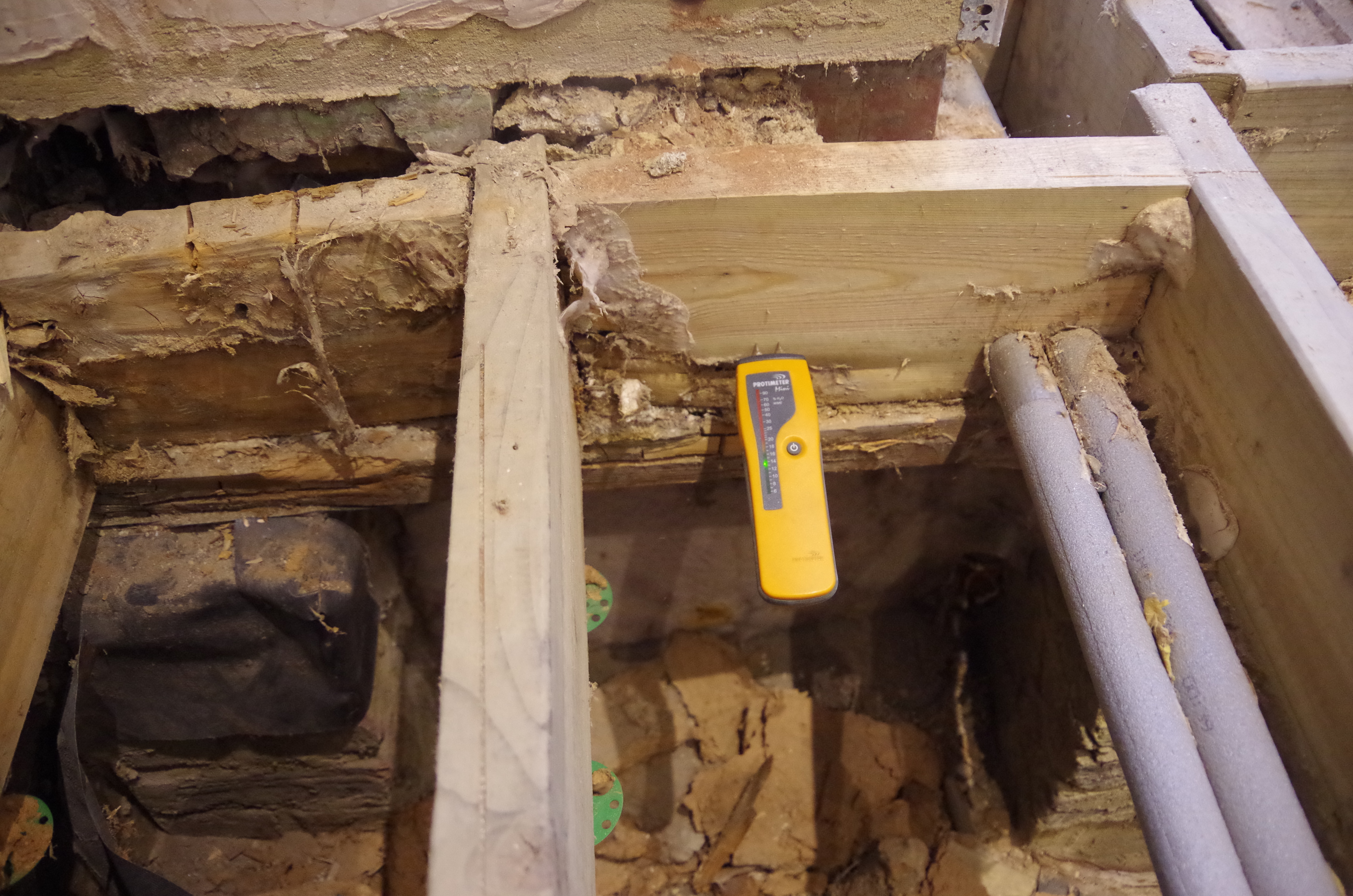 Example of an outbreak of dry rot. Note; the building fabric has passed through the so called ‘moisture zone’ without further damage to dry timbers.

This example clearly shows the dry-rot to be dead. This is because the timber was allowed to dry out. The fungus had fruited and even that has completely wilted; dry rot will fruit when it’s dying, this indicates that its moisture source has been interrupted.

In all cases, the key to preserving a buildings timbers is simple – keep them dry.

Update; Here is the area two months later. The area is free of decay and the sensitive building fabric is dry.

Modern plastic paints trap moisture in timber, so instead of protecting it, they actually cause high enough moisture levels to cause decay

Let our friends at Oricalcum explain something very simple about plastic paints and the damage they do;

And this basic principle applies to cement too.